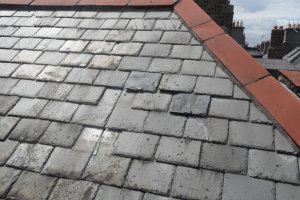 Inspired by motivational speaker and leadership coach Stephen Naughton, I’m starting 2020 with an effort to do some more on social media. It’s hard to believe that we are already in February of the new year. I’m asking myself ‘Did I get a good start to the year?!’ Hmmmm… I’ll get back to you on that.

I was also inspired by the president of the SCSI Johanna Gill, and after a 15-year gap due to the ban on donating if you lived in the UK during the ‘mad cow’ crisis, I gave blood, and yes, it felt good, particularly the self-congratulatory cup of tea and a biscuit upstairs in D’Olier Street afterwards! (www.giveblood.ie).

What stood out in January for me was this roof (only a building surveyor!!) in the prime retail ‘Grafton Quarter’ in D2.My client was entering a new lease and the landlord was refusing to contribute to the replacement of the roof. What’s a tenant to do? Sign up to a 25-year lease in the knowledge that the roof will have to be dealt with? And what will his liability be at the end of the lease in 2045?

What’s an accountant to do?

The commercial question to the CFO must be – do we bite the bullet and replace the roof now, spending a modest six-figure sum, or limp along with a €1-2K annual repair bill, record its condition as is today in a Schedule of Condition and amend the repairing clause so the tenant is not liable to reinstate the roof in any better state of repair than that referenced in the Schedule of Condition appended to the lease agreement?What’s a building surveyor to do?

The question I am asking myself is, ‘Will the roof be in such a state of disrepair in 2045 that the only feasible repair is replacement?’ [Christ – what’s my PII excess again?] There is an abundance of UK case law dealing with this and the probability is that my client will have to replace the roof covering at lease end. So best advice is to do it now. It should be, subject to the CFO’s approval, a more reasonable and feasible method of repair to replace the roof in its entirety now.

Call/email me or one of the lads in the office re your roof!